88.9k
Over 141 million Americans, just under half the country, breathes in air that the American Lung Association deems unhealthy due to high levels of ozone and/or particulate pollution. Ozone and particle pollution can lead to a variety of health problems including increased risk for developing asthma in children and respiratory damage for those with asthma; cardiovascular harm in the form of heart attacks, strokes, and heart disease; central nervous system issues; reproductive and developmental complications; and cancer.

California has the most cities with polluted air, taking six out of the top-10 spots on the list of the most polluted metro areas in the country. This year, the Fresno metro area had the most polluted air of any metro area in the country, with Bakersfield in southern California taking second place. Part of the reason for the bad showing this year is in part due to the intense wildfires that plagued the state. Last year was by far the worst year for wildfires in the state, with fires burning longer and bigger than ever before. Wildfires release enormous amounts of particulate pollution. Beyond that, poor air quality in the state is also the result of agriculture, industry, rail freight and traffic congestion.

The places with the least polluted air are spread out across the country, with Hawaii, New York, and Wyoming doing particularly well, each snagging two top-10 spots. The least polluted metro areas also tend to be the less populated. 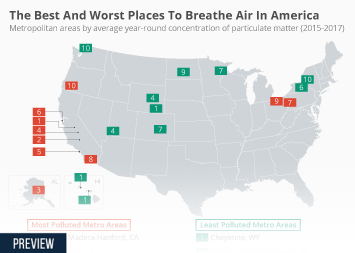