88.9k
Traditionally in most cultures, it is the man which would spend the most hours each day at work and, as analysis from MenCare's 'State of the World's Fathers' report shows, this is still generally the case in most parts of the world. There can though, be a difference between being 'at work' and 'working'. For many people, 'working' doesn't entail going to the office or the factory, but staying at home or in the local community as a caregiver. This kind of work doesn't usually come with a financial benefit, of course, and according to the UN this unpaid care can include "meal preparation, cleaning, washing clothes, water and fuel collection and direct care of persons (including children, older persons, persons with disabilities, as well as able-bodied adults)".

As this infographic shows, it is the world's women that are putting in the largest amount of these unpaid hours and in every region, the total amount of time spent working, paid or unpaid, is higher for women than it is for men. With the exception of East Asia & the Pacific, where it is an almost 50:50 split, the majority of women's time spent working is unpaid. 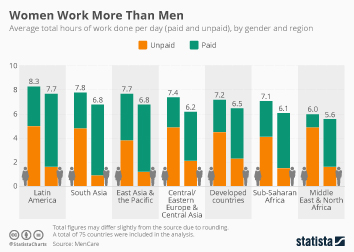 This chart shows the average total hours of work done per day (paid and unpaid), by gender and region.