On July 5, 1994, the 30-year-old Jeff Bezos filed the paperwork to start a company called Cadabra, an online bookstore. Quickly re-named Amazon, after the world’s largest river, the company sold its first book one year later and went public in May 1997. Back then, even the keenest optimists could not have foreseen what Amazon would eventually turn into: one of the largest, most influential companies in the world. Last Friday, on July 2, 2021, the company’s shares closed at $3,510.98 for a market capitalization of $1.77 trillion.

Thanks to ever-growing revenue and a newly found appetite for profit, Amazon has been on a bull run for a while now, with its share price almost doubling over the past two years alone. While the company’s shares have looked like a very good investment for the better part of the 24 years since the company’s IPO, the past five years really have been the icing on the cake.

Anyone smart, patient or just lucky enough to have bought Amazon shares in the company’s 1997 IPO and keep them, can now look at a small or (depending on the initial investment) sizeable fortune. As our chart illustrates, an initial investment of $1,000, enough to buy 55 shares at a price of $18 in May 1997, would now be worth more than $2 million. Next to the stock price’s climb from $18 to $3,510, the huge return can be attributed to three stock splits, which turned one share bought in 1997 into twelve shares by the end of 1999. 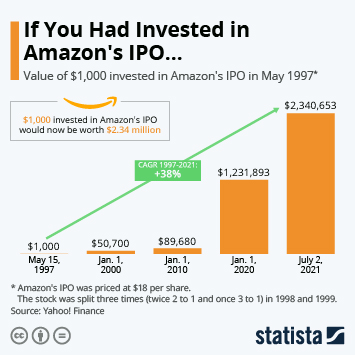 This chart shows how an investment of $1,000 in Amazon's IPO in 1997 has developed over the years.