88.9k
Despite a declining trend over the past 3 years, advertising spending in traditional media still accounts for the largest share of total ad spending in Japan, which amounted to approximately 6.4 trillion Japanese yen in 2017. Traditional mass media consist of terrestrial TV, radio, magazines and newspapers, with television making up more than 30 percent of Japan’s ad spend, showing that in the smartphone era, Japanese advertisers continue to focus on TV commercials to deliver their brand message.

According to the Japanese advertising and public relations company Dentsu Inc., the information and communications industry remains the top ad spender in traditional media in Japan, with about 288.9 billion Japanese yen. While placements for online games fell significantly, stable advertisements for web content and mobile phones, as well as increasing placements for online shops and mobile communication services were the main drivers for the industry’s high ad spend. The sector recording the largest gains since 2016, however, was real estate, primarily coming from major increases in corporate branding advertisements and campaigns for general housing, home security equipment and condominiums that provide care services for seniors. 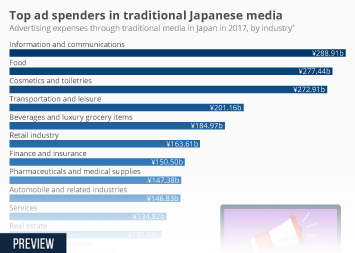 This chart shows advertising expenses through tradtional media in Japan in 2017, by industry.