Skip to main content
53k
74.6k
87k
88.9k
In an attempt to justify its treatment of ethnic Uighur and other Muslims in Xinjiang, the Chinese government released a white paper today detailing the state's anti-terror activity in the autonomous region, claiming that it has adopted a policy that "strikes the right balance between compassion and severity" in its de-radicalization measures.

According to its statistics, China has arrested 12,995 terrorists in the region since 2014 while also seizing over 2,000 explosive devices. Connected to 4,858 religious activities deemed illegal, a total of 30,645 people are said to have been punished. Furthering the focus on religion, 345,229 copies of illegal religious materials are also listed as having been confiscated. The government says that Xinjiang faces a serious threat from Islamist militants and separatists and cites 30 attacks since 1990 which they classify as acts of terror, claiming the lives of 458 people.

The Chinese state's actions in the region remain under international scrutiny. Last year, a United Nations human rights panel said that it had received multiple credible reports that 1 million ethnic Uighurs are being held in what it describes as a "massive internment camp", under the guise of combating religious extremism. The U.S. mission to the UN tweeted in response to these findings that it is “deeply troubled by reports of an ongoing crackdown on Uighurs and other Muslims in China", calling on China to "end their counterproductive policies and free all of those who have been arbitrarily detained”.

Note: The use of terms in these statistics, such as 'terrorist', are taken directly from the Chinese government release/corresponding Reuters coverage. This infographic offers no interpretation on the legitimacy of these definitions. 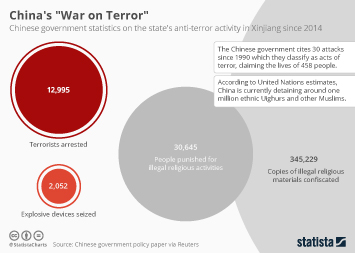 This chart presents Chinese government statistics on the state's 'anti-terror' activity in Xinjiang since 2014.