88.9k
The CDC’s long-standing research has found that autism rates are being more readily identified in communities they are studying. In 2000, the CDC’s Autism and Development Disabilities Monitoring (ADDM) study found that for every 1,000 children 6.7 were diagnosed with autism spectrum disorder (ASD). That pans out to roughly 1 in every 150 children. By 2014, the most recent year data were collected for this survey, for every 1,000 children 16.8 were diagnosed with ASD, which works out to a rate of 1 in 59 children.

The increase in the diagnosis rate over time does not necessarily mean that the true value, in a statistical sense, of autism in the general population is changing. While the average, national rates are represented in the chart, researchers found wide variations between diagnosis rates between each of the 11 research sites, across the country, pointing to an overall imprecision in how autism is and can be diagnosed. In New Jersey, where educational records are readily available, 1 in 34 children were identified with ASD, while in Arkansas there was a 1 in 77 identification rate for ASD. The wide variation between sites indicated that more research is needed to consistently identify autism and better understand the true rate across the nation.

There are many barriers to diagnosing autism. While autism can be reliably identified in children as early as 2, most children aren’t being diagnosed until after 4 years old, meaning that crucial years of intervention and therapy are being lost. Autism diagnoses are often missed in girls and minority children. Boys were 4 times more likely to be identified with ASD than girls, and white children were more likely to be diagnosed with autism than minority children. The ethnic, racial, and gender gap has narrowed since the study began, reflecting increased awareness and improved screening.

The CDC’s Autism and Developmental Disabilities Monitoring (ADDM) Network was created in 2000 and is a reoccurring study orchestrated between 2000 and 2014 to better understand the prevalence of children with autism spectrum disorder (ASD) and other developmental disabilities. Researchers examine the medical records and, when available, education records of 8-year old children in 11 different site locations across the United States in: Arizona, Arkansas, Colorado, Georgia, Maryland, Minnesota, Missouri, New Jersey, North Carolina, Tennessee, and Wisconsin. The study has some limitations. The research warns about inferences about the changing number and characteristics of children with ASD over time. While study methods and geographic coverage have remained consistent overtime, biases are introduced into the study due to the use of survey and time series data. 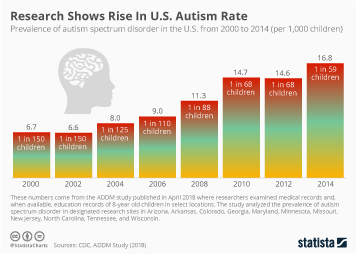