88.9k
Malaysia emerged as a new major hub for plastic waste imports after China’s decision to ban imports of plastic scrap in early 2018. The four biggest exporters of plastic waste, Germany, The UK, the U.S. and Japan, shipped a total of approximately 650,000 tons to the Southeast Asian state that is only 330,000 square kilometers in size.

The top four exporters accounted for around 50 percent of global plastic waste exports in 2018, according to the UN Comtrade database. Only about 240,000 tons ended up in China and Hong Kong as imports were being phased out. Other Asian countries, including India, Thailand, Vietnam and Indonesia, were also popular export targets, but didn’t come close to Malaysia’s numbers. Many Chinese recyclers moved operations to the country which has a sizable Chinese-speaking population, according to the South China Morning Post. The plastic waste trade is very diverse globally, with major exporters using a plethora of different partners in developed and developing countries.

Buyers of plastic waste typically process the material into pellets that can then be resold to manufacturers and turned into plastic products again. Unfortunately, processing plants often burn low-grade plastics they can’t use, releasing toxins into the air. In other instances, reckless businesses dumped leftover plastic waste illegally, like observed by Süddeutsche Zeitung (link in German) in the Malaysian district of Jenjarom. 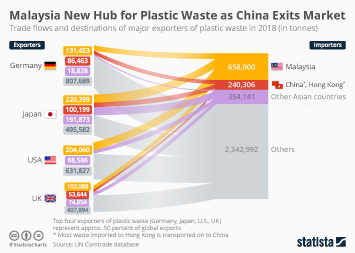 This chart shows trade flows of the largest exporters of plastic waste in the world.