40k
57k
41k
9.6k
Videos featuring children under the age of 13 were viewed three times more than comparable videos not featuring children on YouTube, even when the videos were not intended for a young audience, according to new research by Pew Research Center.

The English-language videos that were analyzed during this study were by and large not intended for children. A user can not join or participate on YouTube’s platform under the age of 13, in line with United States and European laws. The YouTube Kids platform, which provides enhanced controls and content was not a focus of this study.

Pew identified 43,779 popular YouTube channels during the second half of 2018. The Center defines a popular channel as one with over 250,000 subscribers. During the first week of 2019, Pew pulled all the videos from those channels through YouTube’s API and analyzed the content of the videos and their engagement. 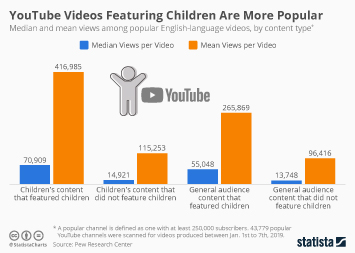 This chart shows the median and mean views per videos among popular English-language videos, by content type.