EU states and the U.S. are currently not tied together by a trade agreement. The proposed and controversial TTIP (Transatlantic Trade and Investment Partnership) agreement that should have bridged the divide has failed, even though the parties left a door open to revive talks in the future. The Trump administration, whose policies have been at odds with free trade at times, has not shown a positive attitude towards a possible agreement. 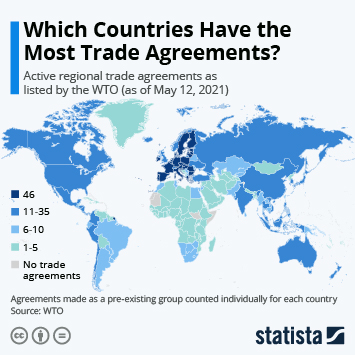 This world map shows how many trade agreements different countries have entered.