Skip to main content
53k
74.6k
87k
88.9k
Nationally, nearly four in ten rural hospitals operate at a negative margin, meaning that they spend more money than they bring in. Additionally, a fifth of rural hospitals in the country are nearing collapse, while a total of 155 rural hospitals have closed entirely since 2005, according to the University of North Carolina’s Sheps Center for Health Services Research.

The rate of closures has inched up since 2010, with near double-digit shutdowns annually since 2012. This year is on pace to post the most closures UNC has recorded. By three months left in 2019, there have already been 16 hospital closures in rural counties. That’s on par with the two maximum years on record.

Closing a hospital means many things for the rural communities they serve. In addition to the immediate loss of emergency care facilities, nearby areas lose high paying jobs. Unemployment often rises in the communities surrounding a closed hospital, while average income also tends to decrease in those areas. Outside employers are less likely to establish new businesses in the area due to the absence of nearby healthcare, while local governments lose tax revenue.

In UNC’s dataset, a hospital is considered closed if they stopped providing general, short-term, acute inpatient care. Hospitals were counted as rural if they were in a nonmetropolitan county or in a sub-county area that has a Rural Urban Community Area (RUCA) code of 4 or greater. 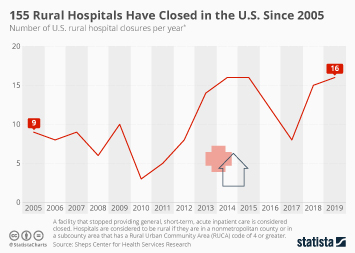 This chart shows the number of U.S. rural hospital closures per year.