Five percent of residents in Iowa are immigrants, but there’s one city that’s different from the rest of the state. Denison, Iowa, has an immigration population of 30 percent, according to U.S. Census Bureau data analyzed by APM Research. There are about 9,000 residents, and nearly 3,000 of them are minorities, WFPL reported on Monday, the same day of the Iowa caucus.

According to 2018 Census data, 91.6 percent of Iowans are white, as opposed to 73.8 percent of all Americans over the age of 18. Another way to look at the data is that 13 percent of the U.S. population were born in other countries.

So why is Denison, Iowa, so different? According to a handful of residents who WFPL spoke to it’s because Denison has welcomed immigrants into their community. “When I came here, it was like, wow. There was so much diversity, and it was like, I feel like I belong, like I can relate to other people, with my culture, music and food. I didn’t feel like an outcast like I did in Storm Lake, Iowa,” Alma Puga, a Iowa resident who came to the U.S. when she was 5 years old, told WFPL.

The Iowa Caucus is the the first nominating contest of the 2020 election cycle and the results could be telling. Since 2000, every candidate who won the Iowa Democratic caucus has cinched the Democratic nomination. 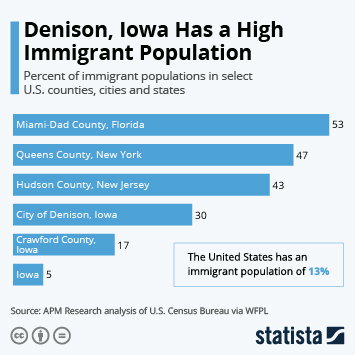 This chart shows the percent of immigrant populations in select U.S. counties, cities and states.