Considering its pleasant climate, sandy beaches and culturally rich cities, it’s no surprise that Spain is one of the most popular travel destinations in the world. As such, the country has come to rely heavily on tourism economically, making it particularly vulnerable to the current crisis.

According to data from the World Travel and Tourism Council, 14.3 percent of Spain’s GDP was directly or indirectly linked to travel and tourism in 2019 – the second highest percentage among the world’s top 15 economies. This makes the current situation all the worse, as international tourism came to a standstill in 2020 due to travel restrictions put in place to limit the spread of the novel coronavirus.

Despite reopening to (some) international tourists on June 21, Spain's vast tourism sector has yet to recover from the initial shock as millions of travelers cancelled their holidays, feeling uneasy to board a plane or sit in a café with fellow tourists. After July and August saw the return of at least some foreign visitors, case numbers started to rise again across Europe, effectively ending the tourism season in September. As the Spanish National Statistics Institute reported on Tuesday, less than half a million international tourists visited the country in November, down 90 percent from the same period in 2019. In total, Spain welcomed 18.3 million international visitors from January through November 2020 - a 77 percent drop compared to the previous year.

Unsurprisingly, the absence of tourists has translated into a heavy financial loss for the country so reliant on travelers. From January through November, foreign tourist spending amounted to $22.8 billion this year, down 76 percent from $95.7 billion in 2019. 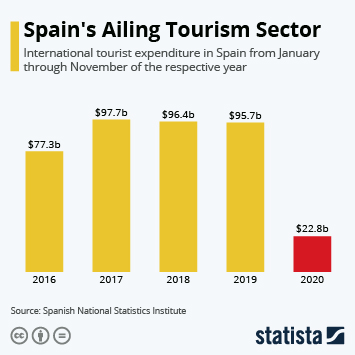 This chart shows international tourist expenditure in Spain from January through November of the respective year.