A global pandemic, economic turmoil and nationwide protests gave Congress plenty to work on in 2020. Now, as the country enters 2021 with a Democrat-controlled Congress, job approval ratings for the House and Senate show how Americans are optimistic these problems may finally see tangible solutions.

In a new survey from Gallup, 35 percent of U.S. adults have a favorable opinion of Congress and the job they’re currently doing. While still low, it's much higher than the 15 percent approval rating observed near the end of last year, and approaches a 12-year high for the metric.

Congress’ approval plummeted in May, when it reached a yearly high of 31 percent following stimulus relief packages passed in April. It quickly dropped to 25 percent in June, however, and only continued to spiral as Americans’ perception of Congress solidified as one of indecision and bitter partisanship.

Newly elected President Joe Biden started his first term with an approval rating of 57 percent - a notable increase from the roughly 40 percent approval rating his predecessor Donald Trump left office with. His rating has since slightly dipped to 56 percent, with pressures mounting for swift COVID-19 relief and other pertinent campaign promises. 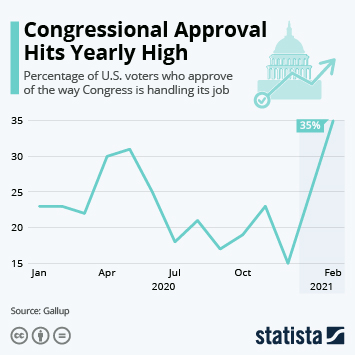 This chart shows the percentage of U.S. adults who approve of the way Congress is handling their job.