According to a recent report by the Economist Intelligence Unit, the cost of slow vaccination timelines will amount up to $2.3 trillion between 2022 and 2025. The amount was calculated for all countries which are not expected to have vaccinated at least 60 percent of their population by mid-2022.

The biggest share of the money lost will come out of Asian countries’ GDPs, which are expected to bear almost three quarters of the total loss. The share of other regions was significantly smaller, while Western Europe and North America were not included. Both regions are expected to have vaccinated 60 percent of their adult populations before the cut-off date.

Only a handful of countries in Latin America – for example Bolivia, Guatemala or Paraguay – are expected to experience a seriously delayed vaccination timeline beyond mid-2022, which brings the region’s share of GDP losses to just 3 percent. African and Middle Eastern timelines are seriously lagging, but because of the economic weakness of the African continent, only 19 percent of losses are expected to hit regional GDPs there. This leaves the Asian continent, where stalling vaccinations affect developed nation Japan, emerging powerhouses India and Indonesia as well as large swaths of Southeast and Central Asia, to bear the brunt of the impact.

According to the EIU, the reason for delayed vaccine timelines was caused by a combination of raw material and production capacity shortages, underdeveloped healthcare infrastructure, vaccine hesitancy and of course financial constraints. It therefore comes as no surprise that two thirds of the GDP losses will be shouldered by developing nations between 2022 and 2025.

Since the vaccine timeline was first published in Q2 of 2021, the EIU has upgraded eight Latin American countries to reach 60 percent vaccinations among the population within the allotted time frame. Only five Asian countries achieved the same. 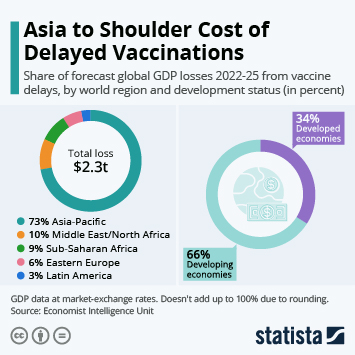 This chart shows the share of forecast global GDP losses 2022-25 from vaccine delays by world region and development status (in percent).