More than 1,500 flights in the U.S. have been canceled and a further 15,000 delayed over the July 4 weekend, as the sheer number of Americans setting out to enjoy the holidays overcame airports' abilities to cope with such high volumes of traffic. Data from FlightAware, a flight tracking site, shows that most of the flights to be canceled came from abroad, namely from China, Canada, and Europe.

Airlines have been under significant pressure this weekend, with a shortage of pilots and staffing meaning the companies are struggling to meet demands of the pace of the return of travel. According to the Transportation Safety Administration, a high of 2.49 million people were screened at airport security checkpoints on Friday, July 1, which exceeded the 2.20 million travelers screened on the busiest Thanksgiving travel day in 2021. Bad weather and a bomb scare in New York’s JFK airport, which accounted for 10 percent of its cancelled flights, have also been cited as reasons for delays, as reported by the New York Post.

Robert W. Mann Jr., a former airline executive who now runs the airline consultancy R.W. Mann & Company told the New York Times that it is usual for about 20 percent of flights to be delayed or canceled. This weekend, however, the figure was closer to 30 percent. This is largely due to the fact a high number of airline workers were either laid off, sought out new jobs, or were forced to take an early retirement through the pandemic.

As airlines try to keep up with the reinvigorated demands of travel, high fuel prices and the cost of inflation are also adding to airlines' woes. 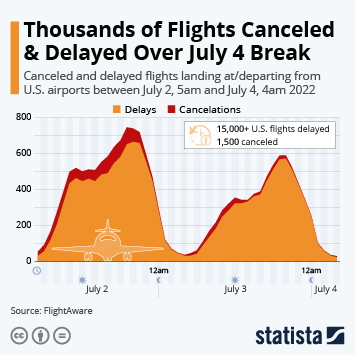 This chart shows the number of flights that were delayed or canceled over the July 4 weekend, 2022.