Despite the fact that President Trump is only going to be in office for one more week, efforts to impeach him for a second time are moving ahead quickly. On Monday, House Democrats introduced a single article of impeachment against Trump, charging him with "incitement of insurrection" in the wake of last week's events at the U.S. Capitol.

"Donald John Trump engaged in high Crimes and Misdemeanors by inciting violence against the Government of the United States," the resolution says, adding that Trump "willfully made statements that, in context, encouraged — and foreseeably resulted in — lawless action at the Capitol."

Usually, impeachment is a lengthy process that takes weeks to prepare. However, given the timeline and Democrats' experience from last year's impeachment, things have progressed much quicker this time. After Mike Pence refused to invoke the 25th Amendment to remove President Trump from office, the House of Representatives could vote on impeachment as early as Wednesday, but it remains unclear how things would proceed from there.

The following chart explains the formal impeachment process, illustrating what would need to happen for Trump to be officially removed from office, stripped off some of his presidential privileges and banned from running again in 2024. 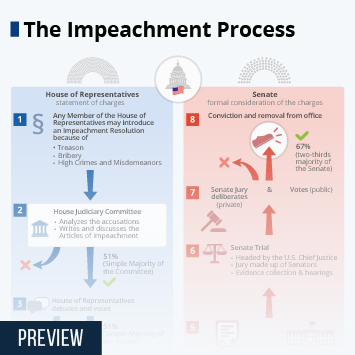 This chart describes the formal process of Impeachment of the U.S. President by the Congress.