Yogurt, also known as yoghurt or yoghourt, is a food product made by the bacterial fermentation of milk. The production of yogurt was first recorded in Turkey between 1615 and 1625. The specific bacteria used to make yogurt are called “yogurt cultures”. Cow’s milk is most commonly used to make yogurt, as it is widely available globally. Yogurt is naturally sour, therefore, it can also be sold sweetened in many different forms.

Yogurt has a number of health benefits, including the effects from probiotics which are commonly added to yogurt during production. The global yogurt market value is forecast to reach approximately 51 billion U.S. dollars by 2024. With the rise in veganism around the world, it is not surprising that sales of non-dairy yogurt are set to increase year on year, estimated to reach around 7.4 billion U.S. dollars worldwide by 2027. In Canada, the revenues of the yogurt market reached more than 1.72 billion Canadian dollars in 2021.

Dairy products in general are popular in Canada, as farm cash receipts from dairy products have seen steady growth in past years, and were estimated at 7.4 billion Canadian dollars in 2021. The volume of yogurt available for consumption in Canada amounted to around 9.14 liters per capita in 2021. Frozen yogurt has gained popularity recently worldwide as a perceived healthy alternative to ice cream. The volume of soft frozen yogurt produced in Canada has fluctuated in recent years, with production reaching around 500,000 liters in 2021.

Market shares in yogurt in China 2010 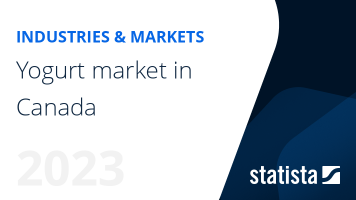 The most important key figures provide you with a compact summary of the topic of "Yogurt market in Canada" and take you straight to the corresponding statistics.