Published by L. Ceci, Oct 18, 2022
In recent years, the United Kingdom emerged as the most lucrative mobile app market in Europe, ranking ahead of Germany, France, Russia, and Italy in 2021. Nationwide revenue from app sales amounted to 3.4 billion U.S. dollars that year, with more than half of the overall profit being made through the Apple App Store.

Which apps are the most popular in the UK?

In the UK, communication apps are the most widely used app category after internet browsers. Here, e-mail, messenger and social media apps were used regularly by 62 percent of respondents, followed by shopping apps, calendars, and games. In 2021, the Meta-powered app for Facebook, as well as WhatsApp saw approximately 41.55 million and 40.83 million monthly active UK users, respectively. The video format appeared to be particularly popular with users in the country, as the YouTube mobile app saw more than 33 million users engaging with the platform’s content monthly. TikTok was the most engaging app in the United Kingdom, with more than 1,000 minutes spent on average by each user on the popular short-form video platform.

Apart from keeping themselves social and connected, UK app users were also highly engaged in mobile gaming. In the third quarter of 2021, mobile gaming apps were the most popular app category in the United Kingdom by far, amassing 203 million downloads. As of October 2021, casual gaming apps like MAD FUT 22, Hooper Hooper, and Flex Run 3D figured among the most downloaded mobile apps for iPhone, iPad, and Android users in the United Kingdom.

Despite social media and entertainment apps’ widespread popularity, game apps also generated the most income. Coin Master was the highest earning app on the UK Google Play Store in October 2021, with 8.7 million U.S. dollars in revenue. This was followed by Candy Crush Saga, MIR4, and Roblox. Meanwhile, things looked quite different in the Apple app store. Here, Tinder was the most lucrative app for iPhone users, with a revenue of more than three million U.S. dollars during the same month, followed by streaming platform Disney+ with 1.86 million U.S. dollars.

The new social: TikTok in the UK

Launched in 2016, TikTok has rapidly revolutionized content formats and further popularized short videos on social media. In the United Kingdom, TikTok users were estimated to be approximately 13 million in 2021. In 2021, the most watched TikTok video in the United Kingdom was posted by user @mmeowmmia: featuring Mia the cat, the video was titled “proving that cats rule” and generated nearly 185 million views. Apart from the always popular cats-on-the-internet genre, British online activists and educators were also using the platform to promote their message: in 2021, charity campaigner Nicole Lilly Christou was the most followed content creator on TikTok in the category of educators and activists, followed by mental health activist and psychologist @DrJulieSmith with approximately three million followers.

In the following 7 chapters, you will quickly find the 56 most important statistics relating to "Mobile apps in the UK".

Statistics on the topic
Daily time spent on mobile activities in the UK
4hrs
UK consumer spending on apps in 2021
3.4bn USD
Number of gaming apps downloads in Q3 2021
203m 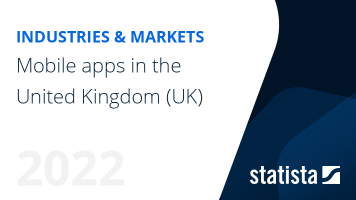 The most important key figures provide you with a compact summary of the topic of "Mobile apps in the UK" and take you straight to the corresponding statistics.