Twitter is an online microblogging platform which combines the characteristics of blogs, social media, and instant messaging. This enables users to be in real-time contact using "tweets", messages of no more than 280 characters. These can be sent from a browser, mobile phone or tablet app, email, and so on. According to the most recent data on the industry, Twitter is one of the leading networks worldwide based on active users, as well as one of the social media with the highest montly active users (MAU) growth from 2019 to 2021. Therefore it is not surprising that its founder, Jack Dorsey, is the one of the richest social media billioners in 2020.
Specially suitabe for millennials

In Spain, the number of Twitter users has risen gradually during the last years, but without surpassing five million profiles. The social network is especially popular among millennials. Roughly 3 out of 5 millennials use Twitter, making it the fifth most popular social media network among them. At a local level, Madrid has the highest number of active Twitter users, followed by Barcelona, in large part because they are two of the country's most populated cities.

Dorsey's social networking has consistently been making a net profit in Spain, however, Twitter's benefits in Spain only account for a small portion of its total declared income in the Mediterranean country. Globally, the platform has generally seen a steady increase in income, and Twitter's revenue amounted to nearly 3.7 billion U.S. dollars in 2020. The secret of such as sucess lays in its simplicity and speed. Many users have embraced the style of real-time communication, made easier by the platform’s focus on brevity. The extent of its influence appears in traditional media, as television and radio programs often ask users to tweet with a particular "hashtag", a followable identifier.

Advertising and marketing agencies also have found out how to seize the advantages of Twitter and started to launch influencer marketing campaign which increase not only revenue but the engagement among brands and networking users as well. One of these companies who has played rights its cards is Imagina Digital, which has turned into the leading advertising agency on Twitter campaigns based on user engagement. Regarding fans and followers, as expected, football teams are Twitter's kings and Real Madrid head the ranking with ober 36 millones fans.
This text provides general information. Statista assumes no liability for the information given being complete or correct. Due to varying update cycles, statistics can display more up-to-date data than referenced in the text.

Facts and figures in Spain 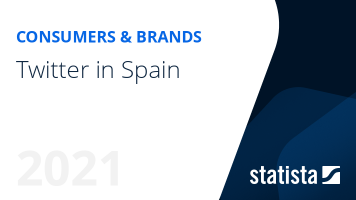 The most important key figures provide you with a compact summary of the topic of "Twitter in Spain" and take you straight to the corresponding statistics.

Users and Usage in Spain