Even though estimates about rising sea levels vary, the Center for Climate Integrity has published an analysis which estimates that the U.S. will have to invest $416 billion in constructing seawalls between now and 2040. At state level, Florida is expected to have to spend $76 billion on seawalls over the next two decades with while Louisiana will have the second-highest bill at $38 billion.

When it comes to the cities at the greatest risk, Jacksonville in Florida will have to spend $3.5 billion improving its storm-surge defenses while New York will have a $2 billion outlay and Virginia is expected to pay $1.7 billion. Galveston in Texas will have the fourth highest bill of any city with $1.1 billion which equates to $21,282 for each of its residents.

That begs the question: who is going to pay for half a trillion dollars worth of seawalls? It quickly becomes obvious that most cities will have trouble paying, particularly considering Galveston's hefty bill per inhabitant. That means many will have to turn to federal funding, with Staten Island setting a recent example. It is building a five-mile seawall which is supposed to withsand a 300-year storm. It is expected to cost $615 million with $400 million being covered by federal funding. Considering the devastating impact of Hurricane Sandy which caused 13 deaths and $19 billion in economic losses, an expensive but effective seawall can prove a wise long-term investment. 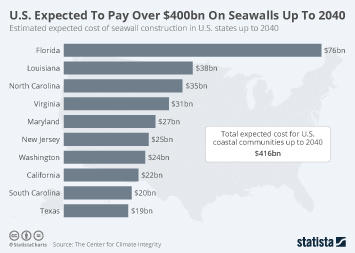 This chart shows the estimated expected cost of seawall construction in U.S. states up to 2040.