53k
74.6k
87k
88.9k
The International Renewable Energy Agency recently reported that 11 million people were employed in renewable energy across the world in 2018, an increase on 10.3 million a year earlier. Even though the industry has an increasingly diverse geographic footprint, the bulk of employment is concentrated in just a handful of countries. China is the clear leader in renewable energy employment and it had 4.1 million jobs in its sector last year, 39 percent of the global total. Despite that impressive figure, its total actually dropped compared to 2017 due to a suspension of subsidies and lower domestic sales.

Brazil comes a distant second on the list of countries with the biggest renewable energy workforces. The largest biofuels employer on the planet, around 1.1 million people were employed in its renewable energy sector last year. Brazil has 832,000 people employed in biofuels and given how it is ramping up its wind and solar activities, its total is expected to continue to increase.

Despite President Trump's coal-friendly policies, employment in the U.S. renewable energy sector grew from 786,000 in 2017 to 855,000 in 2018. That was despite solar jobs falling for the second consecutive year amid uncertainty regarding the president's tariff policy and state-level changed in California and Massachusetts. Elsewhere, India has recorded dramatic gains. It had 432,000 jobs in 2017 and that grew to 719,000 in 2018. 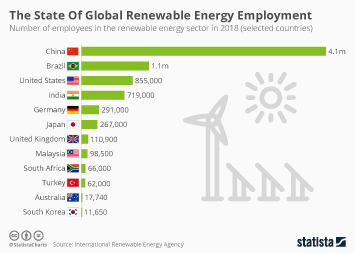 This chart shows the number of employees in the renewable energy sector in 2018 (selected countries).