Skip to main content
53k
74.6k
87k
88.9k
A World Animal Protection report has outlined the huge scale of the multibillion dollar dolphin entertainment industry. Even though the 1993 film "Free Willy" boosted the anti-captivity movement and more recently the documentary "Blackfish" provoked a considerable backlash against marine parks, the report was still able to identify 3,603 cetaceans in captivity across the world, of which 3,029 are dolphins. Venues make money from the animals in many ways from shows to interaction activities and it is estimated that they generate between $1.1 and $5.5 billion every year.

336 facilities in 54 countries keep dolphins in captivity and 60 percent of those animals are found in just five countries - China (23 percent), Japan (16 percent), the United States (13 percent), Mexico (8 percent) and Russia (5 percent). Even though opinion has started to turn against cetaceans performing in marine parks in the West, partly due to "Blackfish", other countries have continued to increase their venue and animal count. China is the world's worst offender and researchers were able to identify 707 animals in captivity. Japan had the second-highest total with 497.

Even though opinion is changing, American marine parks still keep 400 dolphins in captivity. When it comes to geographical regions rather than individual countries, the Mexico, Caribbean, Bahamas and Bermuda (MCBB) region accounts for 19 percent of all captive dolphins globally. The Bahamas was named in the report as the country with the highest number of animals per facility. A bottlenose dolphin has a natural range of 100 kilometres and the average enclosure in marine parks is 77,000 times smaller, resulting in serious health problems for the animals.

The report had several recommendations such as an increase in welfare standards for captive cetaceans, particularly when it comes to enclosure size, diet and the prevention of breeding. The release of captive-bred dolphins is deemed unrealistic as the animals lack a natural skillset as a result of their artificial upbringing. There are some positive developments, though, with demand for dolphin entertainment now falling among the public. Some countries are introducing prohibitive legislation which has lead to some venues making positive moves such as stopping shows and interactions, ending captive breeding and transferring some animals to seaside sanctuaries. 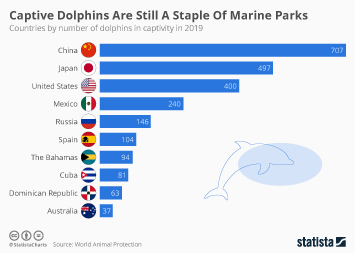 This chart shows countries by number of dolphins in captivity in 2019.