Start-up rocket and satellite companies are springing up across the globe with the promise of providing many different space services and endeavors. One of the leading markets these companies are looking to fill is the production and launching of small low-Earth orbit satellites, or LEOs, and they’re already taking up most of the satellite space.

As of September 30, 2019, there were over 2,200 satellites orbiting Earth, most of which are LEO. These satellites operate fairly close to the surface of the Earth, between 500 and 2000 kilometers. Companies like Space X and Blue Origin are investing heavily in the production of LEO satellites because they’re much better at transmitting data than satellites further away, while at the same time being smaller and easier to manufacture. These companies hope to create a satellite constellation network for data distribution and broadcasting, with some even planning to launch thousands in the near future.

Other satellites—including medium-Earth orbit (MEO), elliptical and geostationary orbit—are less common but fulfill different roles. These satellites get further and further away from Earth while covering a wider surface area, giving more sustained coverage but taking longer to fully orbit. Geostationary orbit satellites are the second-most common, and it only takes three to provide full coverage of the planet. However, latency is especially high since they’re generally over 35,000 kilometers above the Earth’s surface.

While the surplus of new LEO satellites may help provide high-speed data and broadband to all areas of the globe, opponents point to two downsides of having an exponential growth of the small satellites. The first is that no one knows for sure how many LEOs there can be before the risk of collision grows significantly, and once a collision happens, it can set off a chain-reaction for risk of future collisions. The second reason opponents are skeptical of increased LEOs is that many astronomers believe the satellites will interfere with the observation of space, as the sun has already been shown to reflect off small satellites and disrupt astronomical tests. 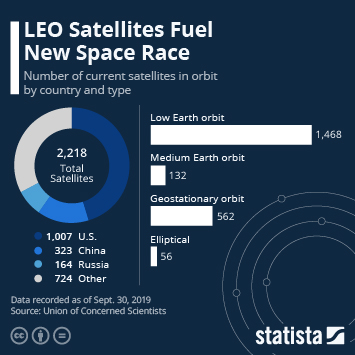 This chart shows the number of current satellites in orbit by country and type.