It’s been a turbulent couple of months in Disney’s headquarters in Burbank, California. Following a record-breaking year at the box office and the launch of its long-awaited streaming service Disney+ in November, the company announced the surprise departure of its successful long-time CEO Bob Iger at the worst possible time in late February, just as the coronavirus crisis was reaching American shores.

Since then, Disney’s share price dropped by more than 50 percent, as major movie releases had to be postponed, theme parks had to be closed and box office earnings evaporated due to the measures taken to contain the COVID-19 pandemic. During these hard times, Disney+ has been the silver lining for the company’s shareholders, as the Netflix competitor had a remarkably successful start in North America, Oceania and the Netherlands, reaching 28.6 million subscribers by February 3, 2020.

On Tuesday, Disney rolled out its streaming service to more European markets at what can either be described as the best or the worst of times, depending on your perspective. On the one hand, all of the countries where Disney+ became available today are at least partially on lockdown, meaning that people are forced to stay at home and might be in the mood for some Mickey Mouse-shaped distraction. On the other hand, Italy and Spain are in the middle of a deadly health crisis, which probably leaves little room for light-hearted family entertainment.

Due to the dire situation in large parts of Europe, Disney even postponed the launch of Disney+ in France until April 7 at the request of the French government. The company also announced that it will lower the bandwidth use of its streaming service by 25 percent for its European launch to limit strain on internet networks. 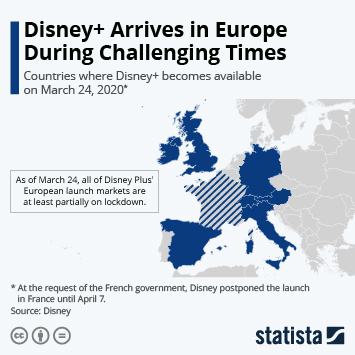 This chart shows in which European markets Disney+ is launched on March 24, 2020.