A mere 298 days had passed between Claudio Ranieri’s Leicester spectacularly winning the Premier League and the aforementioned manager being sacked by the club he had brought such unexpected glory. Elite football management is a cut-throat business.

As this infographic shows though, the Foxes aren’t the most ruthless club in the league when it comes to showing managers the door. Of the current top-flight teams that have played in the Premier League for at least ten seasons, Crystal Palace have spent the average shortest amount of time with each of their managers – 450 days.

The shortest tenure at the South London club was that of Frank de Boer. His ill-fated stint lasted just 77 days after Palace failed to score a single goal in his four league games in charge. In fairness, de Boer was replaced by Roy Hodgson who went on to lead the side for 1,350 days before making the decision himself to call an end to his time as boss– a rare luxury for a Premier League manager – saying: "The time is right to step away from the rigours of top-flight Premier League football."

The other end of the scale is somewhat skewed by two legends of the dugout – Arsène Wenger at Arsenal and Sir Alex Ferguson at Manchester United. Combined, the two spent 17,598 days at their respective clubs. After periods of such stability often come turbulent times though, and for United especially, this has been the case. Calculating for the post-Ferguson era, United’s average would be just 749 days. Arsenal’s first attempt at replacing Wenger – Unai Emery - was ended after 555 days, while Mikel Arteta is still in charge after 687.

After just 11 games this season, 5 clubs have already parted ways with their manager and chances are there’s at least one more club with a drafted press release containing the phrase: “We would like to thank <insert manager’s name> for his dedication and hard work." 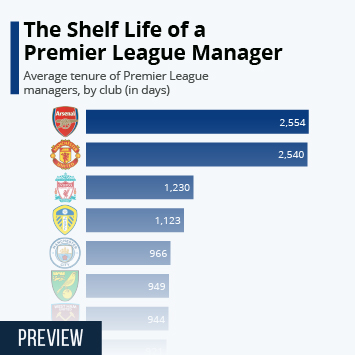 This chart explores the average tenure length of Premier League managers, by club.