Born June 8, 1955, Tim Berners-Lee, often referred to as the inventor of the internet, turns 65 today. More than 30 years ago, on March 12, 1989, Berners-Lee unwittingly made history by laying the groundwork of what would later become known as the World Wide Web. Working at the European Organization for Nuclear Research (CERN) at the time, Berners-Lee distributed a paper to his colleagues entitled “Information Management: A Proposal”, in which he suggested creating a networked hypertext system to help CERN manage and share information within its organization.

“We should work toward a universal linked information system”, Berners-Lee wrote in his conclusion, adding that “the aim would be to allow a place to be found for any information or reference which one felt was important, and a way of finding it afterwards. The result should be sufficiently attractive to use that it the information [sic] contained would grow past a critical threshold, so that the usefulness the scheme [sic] would in turn encourage its increased use”. While this sounds like a fancy description of the internet as we know it, it wasn’t until the next year that Berners-Lee coined the term WorldWideWeb in another proposal co-authored by Robert Calliau, which was still targeted at the scientific community rather than the global public.

Despite its name and apparent ubiquity, however, 30 years after its birth hour the World Wide Web is not nearly as universally available as its name suggests. According to the latest estimates by the International Telecommunication Union, a UN agency specializing in information and communication technologies, only 54 out of 100 world citizens used the internet in 2019. While internet access in regions such as North America and Europe has become a commodity not unlike electricity and running water, people in less developed regions often still lack access to what has arguably become the most important source of information of our times. This is reflected in the fact that internet penetration ranges from 86.6 percent across developed countries to 53.6 percent in developing countries and less than 20 percent in the least developed countries in the world. 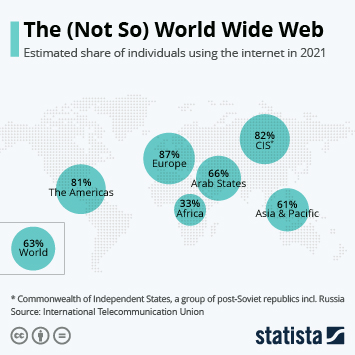 This chart shows how many people around the world use the internet.

Cost of the Internet