88.9k
Since the federal Refugee Resettlement Program was created in 1980, the United States has welcomed more than three million refugees from all over the world. In recent years, however, intake has declined noticeably amid the Trump administration's move to limit annual refugee intake to just 30,000. That has had the greatest impact on Muslim-majority countries who have seen admission numbers plummet 90 percent from 2017 to 2018 according to the International Refugee Assistance Project. Syrian refugees form the largest population seeking resettlement and they have been hardest hit by the change in policy. In 2016, for example, 12,587 Syrian refugees were resettled in the U.S. and in 2018, only 62 were admitted. 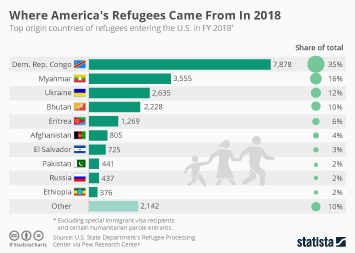 This chart shows the top origin countries of refugees entering the U.S. in FY 2018.