88.9k
In his paper "The economics of World War II: an overview" Mark Harris tries to establish the "contribution of economics to victory and defeat of the great powers in World War II." The underlying question being: Were the Axis Powers, Germany, Italy and Japan, in the end simply out-produced?

Not in the first period of the war, Harrison argues. "In this first period, the advantages of strategy and fighting power enabled Germany and Japan to inflict overwhelming defeats upon an economically superior combination of powers." Only when the axis power’s war drive started to lose momentum, arguably 1941 or 1942, did a kind of war of attrition begin.

This was when "economic fundamentals reasserted themselves", as Harrison puts it. "Superior military qualities came to count for less than superior GDP and population numbers." This leads Harrison to argue that ultimately, it was economic might that indeed led to the defeat of the Axis.

Our chart shows the production capacities for one of the most important tools of war back then, the tank. Indirectly it illustrates that the Second World War truly was an industrialised war, also fought behind the lines on the assembly lines. Most tanks and self-propelled guns were produced by the Soviet Union.

However, economic might can't win all wars, as demonstrated by the Vietnam War, in which the United States was emroiled in for more than 10 years from the mid-1960s onwards. 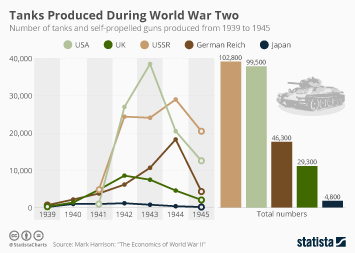