In recent years, the housing market in the Netherlands has continued to improve, due to low mortgage rates, a recovering economy and a higher level of consumer confidence.

In the four largest municipalities in the Netherlands, the demand for housing now outweighs the supply. These days, the housing market in Amsterdam for example is booming. The housing stock in Amsterdam is relatively small, houses are for sale for short periods only and sometimes sold for a price (much)higher than the asking price. In December 2016, the average asking price per square meter of a house in the municipality of Amsterdam was approximately 4,930 euros, an increase compared to the asking price of approximately 3,380 euros in December 2014.

Outside of the four largest municipalities, the situation is very different, with lower asking prices and supply still outweighing demand. The crisis has not passed for homeowners in rural provinces like Drenthe, Limburg and Brabant, where many mortgages are still under water.

Last year the Financieel Stabiliteitscomité (Financial Stability Committee or FSC), consisting of the Dutch Central Bank, the Ministry of Finance and supervisor AFM, already warned against overheating - suggesting that prices paid are becoming too high, so that house buyers run a risk of losing money when the housing market deteriorates again. But for now, the end of the rising prices is not yet in sight - especially in the western Randstad area. 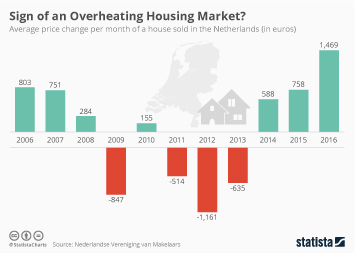 This chart displays the average price change per month of a house sold in the Netherlands from 2006 to 2016 (in euros).