Known as the home of the hashtag, Twitter has also been a popular advertising tool, though the service is used much less vigorously for marketing purposes than its competitors. What sets Twitter apart from other social media behemoths is its firm entrenchment with the daily news cycle, as well as its role as an online communications channel for governments and public figures. However, 2022 turned out to be a trial year for Twitter, when Elon Musk announced he will buy the platform. Events spiraled from then on, with Musk backing out of the decision and then eventually making the purchase in October. But that was not the end of the turbulence. Since the takeover, advertisers and marketers are closely following the changes introduced to Twitter’s operations and cautiously evaluating their future business dealings with the platform. While Musk is letting go of Twitter’s top advertising professionals and executives, the ad industry is responding with caution. One of the biggest ad companies, IPG, has released communications to their clients, with recommendations to suspend spending on Twitter for the time being. In 2022, Twitter’s ad revenue worldwide reached six billion U.S. dollars – which accounted for 90 percent of the company’s total revenues, according to estimates. Therefore, any controversial changes to the platform’s operations (such as plans to decrease content moderation) can potentially backfire and undermine the company’s gains as advertisers will take their business elsewhere in fear of damage to brand safety.

Twitter is not frequently mentioned in the same breath as Facebook or Instagram when it comes to social media marketing. While Twitter’s ad revenue and the number of monetizable daily active Twitter users (mDAU) have both been growing for the better part of a decade, neither of these figures measures up to the metrics reported by other social media giants. One reason for the lack of enthusiasm about Twitter as a marketing destination could be the platform’s very design and primary usage. At its core, Twitter is a source of news, information, and exchange of ideas, rather than a place where online users go for inspiration or brand discovery. Less than 30 percent of recently surveyed industry specialists stated plans to increase marketing activities on Twitter, while over 60 percent looked to boost Instagram and YouTube usage in the future. This growing divide between the social media champions is already reflected in Twitter ads’ costs-per-click (CPC), which are significantly lower than that of Facebook, Instagram, YouTube, or LinkedIn. Advertising on Twitter is comparatively cheap, and even though the company continues to widen the variety of marketing opportunities on the platform (offering promoted ads, interactive polls, trend takeovers, and Twitter watch parties), Twitter’s ad engagement growth has visibly receded.

In today’s competitive digital marketing space, two platforms are ahead of the game. Facebook has maintained its spot as the most-used social media platform among marketers for many years, offering businesses the chance to promote their products and services to billions of consumers from around the world. Not only does Facebook have by far the largest number of users among all social networks, but the California-based business is also among the three most visited websites worldwide, making Facebook marketing an essential part of marketers’ playbooks. But while the platform’s appeal among (young) audiences is beginning to fade, Facebook’s subsidiary Instagram continues to blossom. The photo and video-sharing app has become a true social media marketing sensation, as it allows brands to promote and users to shop via various formats. Instagram has also propelled the influencer marketing movement, a particular branch of social media marketing that Twitter is not synonymous with.
This text provides general information. Statista assumes no liability for the information given being complete or correct. Due to varying update cycles, statistics can display more up-to-date data than referenced in the text.
Published by Statista Research Department, Jan 6, 2023 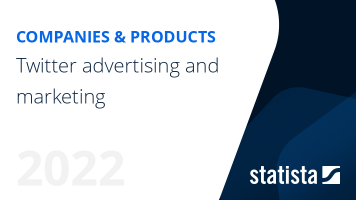 The most important key figures provide you with a compact summary of the topic of "Twitter advertising and marketing" and take you straight to the corresponding statistics.