Social media advertising and marketing in the Netherlands - Statistics & Facts

As social media landscapes evolve within different countries, the questions from marketing professionals on how to best utilize platforms like Facebook and Instagram to fit their organizations' strategies in those particular countries increase. Some might even wonder whether social media marketing could really help their business in a country like the Netherlands that much. For instance, nearly two out of three Dutch respondents to a 2019 survey said they ignored a commercial message if they saw one Facebook and did not consider buying something from there. This was even higher for users of WhatsApp, LinkedIn, Snapchat and Twitter. A similar trend can be seen when it comes to receiving messages. As of 2019, Dutch consumers much preferred messages from either the government, banks, energy suppliers or advertising to come in through email than through social media. That the Dutch do not seem easily swayed to buy something via social media does not mean that advertising on these platforms has no use, however. Using social media for entertainment purposes or to follow favorite brands and personalities were some of the most common uses Dutch people had for their social media accounts in 2019. This might explain some of the developments found within the landscape of social media advertising in the Netherlands.
Instead of social media being used to directly influence consumers to buy something, it is more common in the Netherlands to either see social video or to slowly build a brand online. In 2019, nearly 80 percent of Dutch marketers said they had used social video at least once in the past year. An additional 60 percent said they plan to use these targeted short videos for social platforms "more" or "much more" often in the near future. In 2018, online video ad spending in the Netherlands already made up over one quarter of all online display advertising in the country. This marks a notable shift in marketing, as online commercials and pre-rolls declined in recent years and possibly reflects the aforementioned preference of the Dutch to use social media for entertainment purposes. Some brands with a high reach in the Netherlands, like domestic e-commerce market leader Bol.com, are also known to use social media for puns. An example of this is a picture Bol.com posted on social media in 2019 that involved sold-out earplugs with the line "When vloggers go singing", a response to a (non-affiliated) video posted by a popular Dutch vlogger and musician. By making jokes that feature their products, Bol.com shapes its public branding without always necessarily influencing consumers to immediately buy something. It should be noted, however, that this type of advertising is not done by everyone as paid search advertising was the biggest digital ad category of the country, with over 900 million euros worth of spending in 2018.

The popularity of social video might lead to questions whether influencer marketing is a good way to reach Dutch audiences. YouTube, for example, had the second-highest penetration rate among Generation Z in 2020. When looking at the most subscribed YouTube channels that originate from the Netherlands, however, several things become noticeable. First, most channels seem to have a very international focus. NikkieTutorials, the channel of make-up artist and Eurovision 2020 co-host Nikkie de Jager, is a channel with worldwide appeal, whereas an account like Eswara (the account of Moroccan-Dutch beauty vlogger Meryem van Os-Karin) is in Arabic. Second, popular Dutch YouTube accounts tend to focus on electronic music. Music labels like Spinnin' Records and DJs such as Martin Garrix and Hardwell top the online video charts as well. Marketers might wonder whether these channels are useful if they want to exclusively target a Dutch audience. Alternatively, there are several popular Dutch streamers on the gaming platform Twitch.
This text provides general information. Statista assumes no liability for the information given being complete or correct. Due to varying update cycles, statistics can display more up-to-date data than referenced in the text.
Published by Statista Research Department, Jan 6, 2023

Programmatic ad spend in the Netherlands 2017-2021

Most subscribed YouTubers from the Netherlands 2022 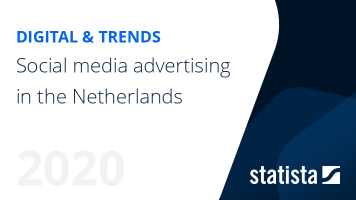 The most important key figures provide you with a compact summary of the topic of "Social media advertising and marketing in the Netherlands" and take you straight to the corresponding statistics.

Social media reach in the Netherlands