Mobile payments are digital payments that are exclusively performed with a mobile device, either online of offline, and the United Kingdom is no stranger to this. The UK mobile payments market is said to have more than 10 million users since the coronavirus pandemic, accelerating a shift towards a more cashless society as many people used less bank notes and coins for in-store transactions. That same year, mobile payments made up nearly one quarter of all smartphone users in the country. Compared to other payment methods, however, mobile payments where consumers swipe their phone past a terminal are not as popular as card payments. This is different in UK e-commerce, however, where mobile wallets rank as the most popular way to pay for online shopping.

Mobile payments in the UK were greater than in any other European country in 2020. Predictions are, however, that it will not be the fastest growing country come 2025 - as the compound annual growth (CAGR) for the United Kingdom is relatively low compared to countries like Germany, France, or Germany. This could indicate that mobile wallets were adopted earlier here than in other major countries. Indeed, Statista estimates that the UK only ranked behind Denmark and Sweden when it comes to mobile payment penetration in 2021. Younger people within the UK, especially, had registered for apps like Apple Pay or Google Pay over the course of 2020.

A country of foreign payment brands

Interestingly, mobile payments in the United Kingdom is mainly driven by non-domestic brands. This is different from, say, Sweden, where mobile payment app Swish is used far more than PayPal. In the UK, however, PayPal’s monthly active user (MAU) count reaches about three million people. Indeed, nearly all UK respondents to Statista’s Global Consumer Survey in August 2021 indicated they had used PayPal at least once in the previous 12 months. The most-used mobile payment method in stores or restaurants, respondents stated to Statista, was Apple Pay. The mobile wallet from Barclays was mentioned for these in-store transactions, but by less than 10 percent of the survey respondents.
This text provides general information. Statista assumes no liability for the information given being complete or correct. Due to varying update cycles, statistics can display more up-to-date data than referenced in the text.

PayPal penetration, both online and offline, in 20 countries worldwide in Q3 2022

Apple Pay penetration, both online as well as offline, in 18 countries worldwide 2022 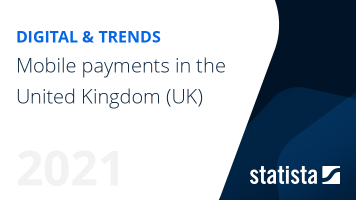 The most important key figures provide you with a compact summary of the topic of "Mobile payments in the UK" and take you straight to the corresponding statistics.