Published by
Marie Charlotte Götting,
May 30, 2022
Radio is one of the few traditional sources of news and entertainment that have stood the test of time in the Benelux region. Despite the ongoing digitalization of the media and entertainment industry, radio remains firmly embedded into the lives of millions of people in the Benelux countries. The latest data on European radio audience sizes showed that an estimated 19 million people listened to the radio across the Netherlands, Belgium, and Luxembourg in 2020, which translates to over 60 percent of the region’s total population. While it should also be noted that the Benelux is home to a diverse and multi-faceted media landscape because of the cultural and linguistic variety within each country, one can easily spot overarching radio consumption patterns.

Radio still enjoys considerable reach and popularity in the Benelux region. In Luxembourg, radio maintained a higher weekly reach than any other media in 2020 – explaining why it draws considerable advertising investments from companies each year. Millions of radio listeners across all three countries tune in every day, and even though surveys showed that the audience reach of radio in the Netherlands dropped by nearly 10 percent in the last decade, this downward trend is unfolding at a much slower pace than in many other markets. The same can be said about radio consumption in the Netherlands, which, despite having decreased since the early 2010s, still stands above 155 minutes per day. Keeping in mind that radio is particularly popular with older generations, it will be interesting to see how fast the industry can adapt to demographic changes and young consumers’ preferences for online media in the future.

The radio landscape in Benelux features numerous stations and networks of all sizes. But even though there is no single player that dominates the airways in all three countries, it is also true that some well-established media companies are expanding their influence on the region via mergers and acquisitions. One such example is DPG Media, a Belgian media company that also owns brands in the Netherlands and Denmark. Industry data shows that two of its stations, Qmusic and Joe, placed among the leading Dutch language radio stations in Belgium in 2021 while also ranking among the radio stations with the highest audience reach in the Netherlands. As for Luxembourg, RTL Radio Lëtzebuerg boasted the highest number of listeners in early 2022. The station is part of the RTL Group, whose Belgian division was recently co-purchased by DPG.

In the following 5 chapters, you will quickly find the 35 most important statistics relating to "Radio industry Benelux". 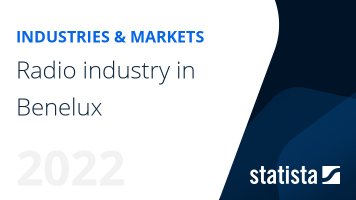 The most important key figures provide you with a compact summary of the topic of "Radio industry Benelux" and take you straight to the corresponding statistics.