Indonesia is one of the fastest-growing mobile markets in the world. As of January 2022, 204.7 million users were actively connected to the internet, out of a total population of over 270 million. The country has seen massive growth in smartphone ownership and mobile internet access in recent years. Indonesian internet users are among the most active mobile internet users in the Asia-Pacific region, spending nearly five hours a day online on their mobile phones. Online activity is concentrated in mobile applications, with more Indonesians using their devices to access social media, messaging services, shopping apps, video streaming, transport, and gaming apps.

The development of innovative features and technologies that smartphones are equipped with nowadays, coupled with user preferences to access the internet on smartphones, has made mobile phones a primary device for internet use in Indonesia. This was enabled by major mobile operators such as Telkomsel, Indosat, and XL Axiata, who have improved 3G and 4G coverage throughout the country, with mobile broadband performance and average speed steadily increasing. 4G network is now available in over 90 percent of the country from all providers. This has resulted in a continued growth in mobile internet customers.

Android is the leading mobile operating system in Indonesia, with over 90 percent of the market share, followed by iOS with about ten percent of the mobile devices market. Indonesian Android users spend the most time on social and communication apps, with about 19 billion hours spent in the fourth quarter of 2021. Among these networks, Facebook remains the most used social media application, with more than 129 million users. This makes it the third country with the largest user base in the world, almost all of whom access the platform via their mobile. In the social networking landscape, the Chinese video-sharing app TikTok has solidly established its presence in the Indonesian market, just a few years after launching in the country. The app has seen the highest growth in social app usage in Indonesia, with one of the highest year-on-year growth in monthly time spent worldwide.

The increase in time spent by Indonesians on apps in recent years has also benefited the e-commerce sector, with shopping apps such as Shopee, Tokopedia, and Lazada concentrating the largest numbers of active users. Indonesian consumers also rely heavily on super apps for their daily routines, as they have the distinction of concentrating daily online activities into an all-in-one service. The strong growth in the use of food and drink mobile apps at the end of 2021 has benefited Grab and Gojek, which dominate this market. They offer e-wallet services such as GoPay and Ovo, which centralize cashless payments and allow for discounts as well as cashback offers.
This text provides general information. Statista assumes no liability for the information given being complete or correct. Due to varying update cycles, statistics can display more up-to-date data than referenced in the text.
Published by Statista Research Department, Nov 24, 2022 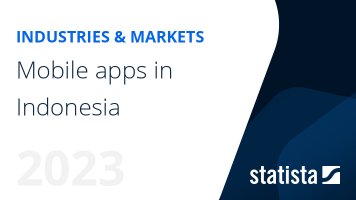 The most important key figures provide you with a compact summary of the topic of "Mobile internet and apps in Indonesia" and take you straight to the corresponding statistics.