The James Bond movie franchise was the highest-grossing in the U.S. for decades, but it also didn't have much competition. The legacy series, which is releasing "James Bond: No Time To Die" in North America today, is currently only the third highest-grossing film series after being overtaken by the swiftly growing Marvel Cinematic Universe. Despite Bond's head start of 45 years, Marvel releases like "Avengers: Endgame", "Black Panther" or "Iron Man" brought in the big bucks quickly between 2008 and 2020 to a cumulative $9.1 billion, overtaking Bond even after adjusting for inflation.

The Bond franchise sat at an inflation-adjusted $6 billion of cumulative U.S. earnings last year, according to movie website The Numbers. While the success of the new release - Daniel Craig's final one - is yet to be determined, Marvel's 2021 releases Black Widow and "Shang-Chi and the Legend of the Ten Rings" already brought in almost $400 million in the U.S. to-date.

In addition, another older franchise - Star Wars - has zoomed past the British special agent in the last decade. The success of the sequel trilogy, released between 2015 and 2019, sealed that deal and elevated inflation-adjusted, cumulative U.S. earning of the franchise to $8.1 billion.

Despite the Skywalker Saga originally envisioned by inventor George Lucas having ended after nine releases, Lucasfilm is planning to continue the series, as are the studios behind the Marvel and Bond films, meaning the fight for the biggest movie franchise will continue. 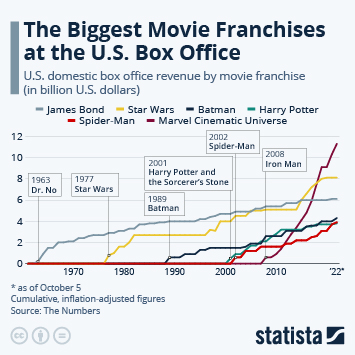 Digital video and TV in the UK