88.9k
If you've spent time in France and frequented areas like Pigalle in Paris, odds are that you have heard the term "Merci Jacquie et Michel", a phrase that has become synonymous with the country's pornography industry. Indeed, the first website was launched in 1999 before the Jacquie et Michel brand was properly established in 2004. Away from the internet, it is now also associated with physical shops, a magazine, nightclub and even a beer.

It's now even possible to purchase the brand's products like duvet covers, boxers, socks and that beer of course in supermarkets like E. Leclerc, Auchan, Cora and Super U. It has also opened its most recent love stores in Frejus and Nice, making for seven in total. Getting back to the website itself, an average of 500 videos are posted every year while it has been using increasingly professional actors since 2010.

Considering the buzz associated with the slogan, just how popular is it across France? Analyzing the Google Search volume of the term "Jacquie et Michel" is one way of gauging its impact. As can be seen from the following infographic, the brand has become increasingly popular and France did indeed reach peak Jacquie et Michel in 2015. Since then, however, its popularity has fluctuated, though searches on Google are still going strong. 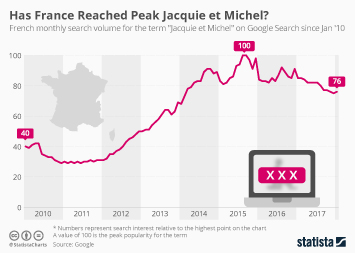 This chart shows the French monthly search volume for the term "Jacquie et Michel" on Google Search since January 2010.