While the U.S. still mourns the passing of legendary Supreme Court Justice Ruth Bader Ginsburg, the confirmation of her successor, Amy Coney Barrett went ahead in the Senate in the last week before the presidential elections. The controversial justice was confirmed in a vote that lacked any minority party support. Barrett was sworn in following the confirmation.

50 votes were needed for confirmation, and 52 Republicans voted in favor of Barrett, the single dissenter being Sen. Susan Collins (R-Maine). Sen. Lisa Murkowski (R-Alaska), who said she would not support the vote, did confirm Barrett in the end.

According to data compiled from reports by the Washington Post, The New York Times and Politico, the confirmation of Supreme Court justices has become increasingly partisan in the last 15 years. The trend became even more pronounced under President Trump. Barrett's confirmation was the first Senate vote on a Supreme Court justice in 151 years without any minority party support, according to the New York Times.

The new nominee was Trump's third addition to the Supreme Court, but his first replacement of a liberal justice. Former U.S. President Barack Obama appointed two justices to the Supreme Court in 2009 and 2010 and was hoping to appoint a third in 2016 after the death of Justice Anthony Scalia. But the Republican-controlled Senate blocked the vote for around nine months until Trump was elected, causing controversy about the Republican Party's decision to rush the vote through this time around.

Obama's picks had resulted in a relatively balanced Supreme Court of four liberal, four conservative and one swing justice, Anthony Kennedy. After Trump's appointments and the departure of Kennedy, the court is considered more conservative at four liberal and five conservative voices, but still handed down a 6:3 verdict in support of LGBTI rights in the workplace in June.

In the current term, the court also ruled in favor Native American rights and the protection of those protected under the DREAM Act, while striking down a Louisiana law that required abortion providers to have hospital admission privileges. These verdicts came at a smaller 5:4 margin, however, showing the potential impact of adding another conservative Trump appointment to the bench. 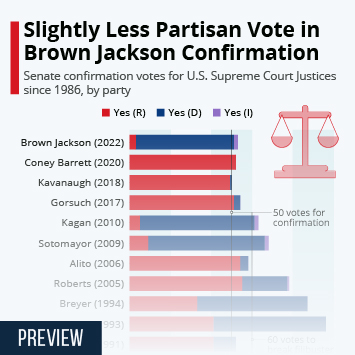