40k
57k
41k
9.6k
For the past four months, the Customs and Border Protection agency has taken over 100,000 migrants into custody per month, a majority of migrants apprehended were families or underaged minors. Despite the sustained high number of arrests, June saw a marked drop in apprehensions, falling 38 percent between May and June.

Widening that perspective, the total number of migrants apprehended at the southwest border in the first seven months of FY2019 has bypassed the total number of migrants apprehended in a single fiscal year over the past decade. May is historically the month that has seen the most border crossings, and officials were bracing for a busy month. The over 144,000 migrants apprehended in May was double what the CBP brought into custody during the same time in FY 2018, making it the month with the single highest monthly arrest since 2007.CBP officials reportedly attributed the dip in migrant apprehensions to increased efforts by Mexican officials to stem the flow of migrants to the border and the multi-year trend of a summer migration dip, due to the dangerous heat conditions in the southwest. 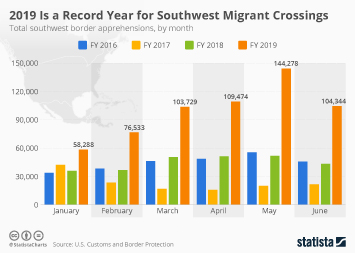 This chart shows the total southwest border apprehensions, by month.