Australians in New South Wales are celebrating after heavy rainfall on Thursday brought some relief to the region. Since September, devastating wildfires have blazed throughout the continent.

“Relief is here for a number of firefighters working across NSW. Although this rain won’t extinguish all fires, it will certainly go a long way towards containment,” the NSW's Rural Fire Service (RFS) said on Twitter Thursday.

Part of what led to Australia’s historic wildfires is the lack of rain. In 2019, Australia experienced one of the driest and hottest years on record, seeing an average of 277.63 millimeters. From 1961 to 1990, the average rainfall for Australia was 465.2 millimeters, nearly double the amount 2019 saw.

While the powerful rainfall extinguished some of the flames, fires are still blazing throughout Oz—and more rain might not be a good thing. The fires have also ravaged vegetation, so roots that normally would have soaked up some of the rainwater are gone. This could lead to flash flooding if the storms continue, CNN reported on January 16.

The Australian wildfires are unparalleled. At least 28 people have been killed, an estimated 1 billion animals have died—including 25,000 koalas on Kangaroo Island— and thousands of homes were damaged or destroyed. 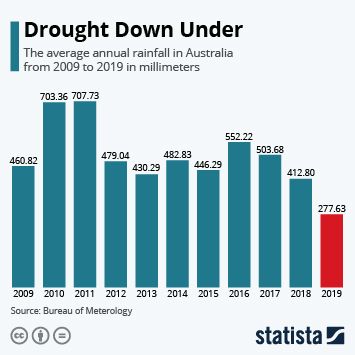 This chart shows the average annual rainfall in Australia from 2009 to 2019 in millimeters.