According to health experts, peaks for the number of daily deaths in some states due to COVID-19 have already passed. Still, adjusted estimates have pushed many peak dates further back and have increased most total deaths by thousands over the last couple weeks.

Projections from the University of Washington show New York, New Jersey and Michigan have already reached their peak date for the most daily deaths resulting from COVID-19. These states have some of the highest projected death tolls in the country, with New York adjusted from 13,463 a month ago to 34,068, New Jersey from 3,915 to 14,692 and Michigan from 1,977 a month ago to 6,621.

Still, other states with the most projected deaths are still approaching their estimated peak date. Florida, which has begun reopening plans, won't reach its peak until June.

Relative to New York, most states are projected to have much lower death rates, even among the highest estimates. Northeastern states, however, are at a much greater risk of having death tolls reach those realized in New York. Connecticut and Massachusetts are two states that haven’t seen large initial death tolls, but higher estimates from the University of Washington show the daily death rate in each state could rival that of New York. 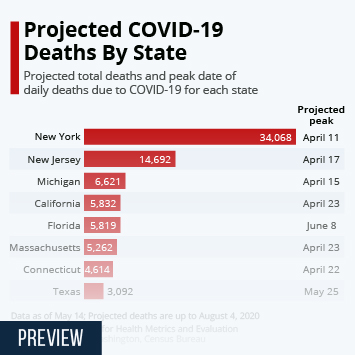 This chart shows the projected total deaths and peak date of daily deaths for each state due to COVID-19 as of April 13.