Despite being the biggest and most significant cryptocurrency, Bitcoin is still famously susceptible to dramatic rises proceeded by equally rapid falls. Having surged to an all-time high of over $60 thousand in April 2021, Bitcoin plunged to just below the $30 thousand mark at the end of July. Instability and crypto go hand in hand though, and the Bitcoin roller coaster raced skyward again soon after, with the record-breaking price of over $67 thousand hit in Early November.

The yo yo gave in to gravity again at the beginning of 2022, fueled largely by the political unrest and protests in Kazakhstan and the subsequent internet shutdown. What did the situation in Kazakhstan have to do with the Bitcoin? Since China's crackdown on the currency, its neighbor has risen to become the second biggest player in the Bitcoin mining landscape, accounting for 18.1 percent of all global computing power used for the activity.

Now in May 2022, Bitcoin has fallen under $30 thousand again. Reflecting not just the global financial turmoil caused by rising inflation as investors seek to shed 'riskier' assets such as cryptocurrencies, Bitcoin's latest drop in price is also connected to the 'stablecoin' terra breaking its $1 peg and the subsequent collapse of Luna. The domino effect this could cause, even for such established currencies as Bitcoin, is what some analysts are warning could prove to be a devastating watershed moment for the market.

As Alex Hern, the Guardian's UK technology editor, writes: "If terra could drop from a market cap of more than $45bn to less than $5bn in two days, what else in the system is on shaky territory? Could USDC or tether collapse in a similar way? And if they went, what else would follow? The collapse of terra may not turn out to be a Lehman Brothers for the cryptocurrency world, but it shows what it could look like. 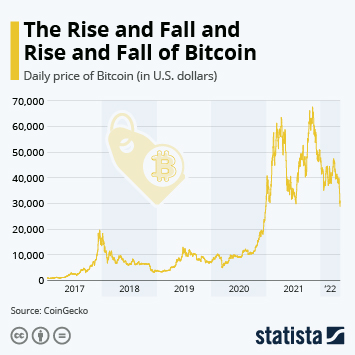 This infographic charts the daily price of Bitcoin from 2017 to 2022.