Hearing the word capital makes most people think of bustling metropolises that house millions of people, but there are also many capitals in the world that seem lightyears away from that image. The smallest capitals in absolute terms can be found in microstates and island nations. The smallest in relative terms shine a light on another phenomenon – purpose-built capitals.

Vatican City leads the list with just around 1,000 inhabitants, which are all appointees of the Catholic church or their immediate family and lose citizenship once the appointment ends. The set-up of the state that is considered a sovereign nation also means that 100 percent of the Vatican‘s inhabitants live in the state‘s capital, Vatican City.

Other capitals that make the list according to U.N. data are Vaduz, the sleepy town of 5,000 inhabitants that serves as the capital of Liechtenstein, or Tuvalu‘s Funafuti, whose 7,000 inhabitants squeeze onto a palm-fringed atoll of a maximum width of 200 meters. While for some island nations, the capital city houses more than half of the population, the share is as low as 6.2 percent in Micronesia’s capital Palikir – no wonder as the county’s 113,000 inhabitants are scattered across 65 inhabited islands.

Six out of the top 8 of the world’s smallest capitals in relative terms share the trait that they were purpose-built to serve the function. The smallest of the bunch are Dodoma, a modest administrative center in central Tanzania, and Islamabad, the more flashy purpose-built Pakistani capital designed by Greek star architect C. A. Doxiadis. The two cities have so far failed to attract more than 0.5 percent of their respective country’s population. However, they represent the two major reasons for countries to rebuild a capital elsewhere: Trying to bring development to an underserved part of the country, most often inland regions, or creating a utopian city representing the country’s ideals. A third reason, appeasing competition between cities vying for the capital position, is represented by Australian capital Canberra and U.S. seat of government, Washington D.C.

Because of the sheer size of both countries, the capitals of India and China also appear on the list. With its nearly 20 million inhabitants, Beijing residents still make up only 1.4 percent of the 1.4 billion people living in China.

Except for city states and other micronations, the countries where the largest share of residents lives in the capital were Iceland (64 percent live in Reykjavik), Uruguay (around 50 percent live in Montevideo), Mongolia (48 percent reside in Ulan Bator) and Paraguay (46 are at home in Asuncion). 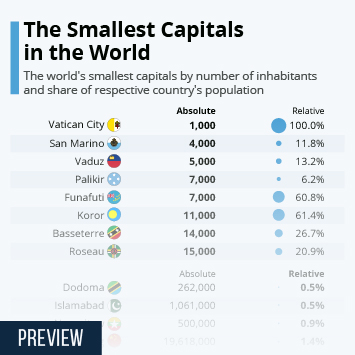 This chart shows the world's smallest capitals in absolute and relative terms (2018).