A New York Times collaborative investigation has brought to light how hundreds of illegal airstrips are enabling criminal mining practices to spread across Brazil’s indigenous lands. According to the writers, gold and tin mining operations have been carried out in secret across the country, leading to “crime that has grown out of control and government workers are too scared to return.”

Even documented, legal mining on indigenous land has long been a problem in Brazil. According to MapBiomas, a collaborative network of co-creators made up of NGOs, universities and tech companies, there has been a 600 percent increase in the known mining area in Brazil between 1985 and 2020, with the largest areas of mining in indigenous lands in Kayapó (7602 ha), Munduruku (1592 ha), Pará, Yanomami (414 ha), Amazonas and Roraima. These figures are likely much higher now, if we consider the illegal mining which is harder to document.

The mining industry has seen rapid growth under Brazilian President Jair Bolsonaro, whose pro-economy government has defunded environmental agencies and loosened policies protecting the country against illegal mining and deforestation, taking a major step back on indigenous rights. This has led not only to mass deforestation - with more than 1,000 square kilometers of Brazilian Amazon destroyed in April of this year, nearly double the month’s record high - but also reports of violence against indigenous communities and the spread of disease, according to news site Mongabay. Only last month British journalist Dom Phillips and Brazilian Indigenous activist Bruno Pereira were murdered for documenting environmental justice issues in the country, as they travelled through an area known for criminal groups engaged in illegal fishing, mining and logging.

But there are other reasons at play too, as Luiz Jardim Wanderley, a Geography professor at Fluminense Federal University (UFF), tells Mongabay: “With poverty worsening in Brazil, rising unemployment and the economic crisis in recent years, the informal, precarious work in the mines, which is even sometimes analogous to slavery, is expanding, attracting more of the workforce.” Not to mention, he adds, the demands of international markets: “Starting in 2017, there was a price increase in the international market for the commodities that are being extracted in Indigenous territories, which include gold, tin and manganese.” MapBiomas found that in 2020, 86.1 percent of what was being mined was gold, followed by 8.4 percent tin, 2.1 percent class 2 minerals, 1.8 percent ornamental rocks, and 1.6 percent of “other” mined products. 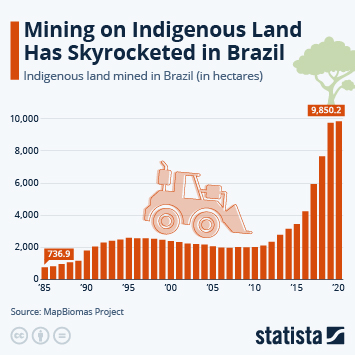 This chart shows the documented mining area in Brazil between 1985 and 2020.