By opening the access to a world of information, instant communication and multimedia content, the internet has changed the way people do their jobs. These technologies, especially web job portals or social networks have also dramatically changed the way people find jobs to begin with, as well as the way employers look for new recruits. In 2018, applications received through job boards accounted for a fifth of job hires worldwide, ranking only behind career sites. During the same period, job boards accounted for almost half of global job applications. According to a global survey of hiring decision makers in North America, 58 percent of the respondents regarded social professional networks as a source for quality hires.
Having a strong presence on social media can work in favor for the job applicant - or not. In 2018, 57 percent of hiring professionals decided not to hire a candidate based on content found on social media. Provocative or inappropriate photographs, videos or information is one of the more common social media discoveries by online recruiters that lead to a candidate not getting a job. However, social media can also provide certain benefits to job hunters: background information supporting the professional qualification of job-seekers is one of the most common social media discovery that lead online recruiters to extend an offer to the candidate. Social media users have become increasingly aware of the two-edged sword of public social media content and during an September 2018 survey, 18 percent of respondents stated to have altered their social media account when applying for a job.

Despite the frequent utilization of job websites and online career pages, only 37 percent of internet users were confident that job application screenings were unbiased. Employer usage of social media advertising targeting only select types on candidates was also viewed critically: only 19 percent of U.S. internet users thought it was appropriate for employers to use social media to target only candidates graduated from a specific school, and 68 percent of U.S. online users thought it was inappropriate for employers to use social media advertising to target only potential male candidates.

LinkedIn is currently the biggest online job advertising platform worldwide. With an audience reach of 160 million users, the United States are the leading market of the professional networking service. The company was acquired by Microsoft in 2016.
This text provides general information. Statista assumes no liability for the information given being complete or correct. Due to varying update cycles, statistics can display more up-to-date data than referenced in the text.
Published by S. Dixon, Feb 8, 2022

Most popular mobile job seeking location according to U.S. job seekers in 2016
In bed

Average number of different resources used during job search according to U.S. candidates in 2015
17.7 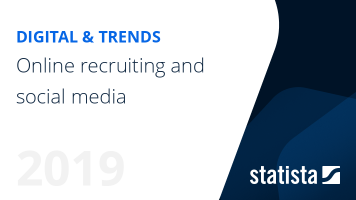 The most important key figures provide you with a compact summary of the topic of "Online and social media recruiting" and take you straight to the corresponding statistics.