Published by Statista Research Department, Nov 25, 2020
Among the top earning YouTube channel creators, one European reigns supreme. Felix Kjellberg, better known by his channel name PewDiePie, earned roughly 15 Million U.S. dollars in one year. Currently his channel has over 53 million subscribers and keeps growing. The importance of vloggers like Kjellberg as well, as written content producers, should not be underestimated. When compared with other sources of information, 53 percent of shoppers stated that the information provided by vloggers and bloggers was more important to their purchase decision than other information channels.
Other Europeans besides Kjellberg have claimed their place among the world's top YouTubers. UK YouTuber Zoella (real name Zoe Sugg) runs the third most watched beauty and style channel with estimated monthly earnings of over 27 thousand U.S. dollars. However, one does not have to be in the top ten lists in the world to still reach a substantial audience. Dutch make-up and lifestyle vlogger Nikkie de Jager reaches over two million individuals with her videos, and generated a public relations revenue of twenty million euros.

Beyond the impressive audiences of some individuals, blogging platforms that allow a user to create their own blog, like Wordpress and Blogger/Blogspot, reach over a quarter of online audiences in the UK alone. Of the general European population, five percent created their own website or blog in 2016. According to Eurostat, the country with the biggest share of creators of blogs and websites in Europe is Denmark.

A closer look at the Italian bloggosphere shows that most blogs reach ten to fifty thousand monthly readers. Only 4.17 percent reach over a million readers. The two leading topics discussed in these blogs are technology and fashion. Bloggers profit most commonly through advertising on their blogs and by receiving invitations for different kinds of events and products to review.

As the UK market illustrates, only six percent of individuals have bought a product after they saw it in an influencer's vlog or blog. However, if the age of the respondents is considered, the number more than doubles for 16- to 24-year-olds. In the future, influencers and thus influencer marketing will only become more important. In the Netherlands 57 percent of influencers get paid to do reviews.

For their work influencers in France prefer the photo sharing site Instagram over blogs and Facebook. Almost all influencers in the Netherlands are active on Instagram every day. Other social media platforms are also used widely. Leaving Twitter and other platforms behind, with 91 percent of Dutch Influencers using Facebook daily, the platform comes in a close second to Instagram. Social media is the place on which influencers rely, where they work and thrive and where they promote themselves and their content.

In the following 5 chapters, you will quickly find the {amountStatistics} most important statistics relating to "Influencers in Europe".

The most important key figures provide you with a compact summary of the topic of "Influencers in Europe" and take you straight to the corresponding statistics. 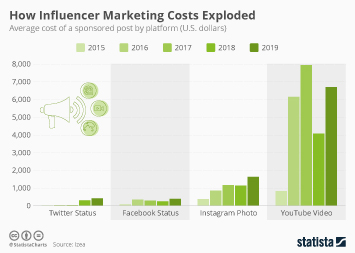