Published by
A. Guttmann,
Mar 7, 2022
Public relations, also known as PR, can be simply understood as the communication process between companies, organizations or individuals and the general public. PR specialists typically work to establish and maintain relationships with an organization’s target audience, the media, relevant trade media, as well as other opinion leaders. Market data for this fast growing sector designed to promote the interests and image of clients, shows that the worldwide public relations revenue is projected to grow from 88 billion U.S. dollars generated in 2020 to approximately 129 billion by 2025. In the United States, PR agencies generated a revenue of 14.5 billion U.S. dollars in 2020, experiencing growth compared to previous years, despite the effects of the coronavirus on the advertising and marketing industry as a whole.

According to an industry ranking, Edelman – a private firm co-headquarted in Chicago and New York City – is the largest PR agency worldwide. In 2020, the company generated nearly 840 million U.S. dollars in fee income, down from 892 million a year earlier. This constitutes an annual growth rate of roughly -5.8 percent. The agency employs nearly six thousand people worldwide. Other key players on the market include BCW, FleishmanHillard, Ketchum, and Weber Shandwick. Weber Shandwick is fully owned by the Interpublic Group of Companies (IPG), which in 2020 was one of the leading agency holding groups with the highest revenue from PR activities.

U.S. public relations specialists earn, on average, 62.8 thousand U.S. dollars per year .The highest wage in the field belongs to PR specialists in professional, scientific, and technical services, whose earnings reach 67.6 thousand U.S. dollars annually. Survey data shows, however, that recruiting and retaining the right talent is considered one of the main challenges in the PR business. Strategic planning and good written communications are the most valued skills for PR professionals.

Lobbying is considered one of the main activities within the public relations industry. In 2021, U.S. lobby spending amounted to 3.73 billion U.S. dollars, up from 3.53 billion in the previous year, when the spending peaked for the second time since 2010. The sectors with the largest lobby spending are health, finance/insurance/real estate as well as miscellaneous businesses. In 2020 there were more than 11 thousand active lobbyists in the United States, earning on average 116.8 thousand U.S. dollars annually.

In the following 4 chapters, you will quickly find the 25 most important statistics relating to "Public relations in the United States".

The most important key figures provide you with a compact summary of the topic of "Public relations in the United States" and take you straight to the corresponding statistics. 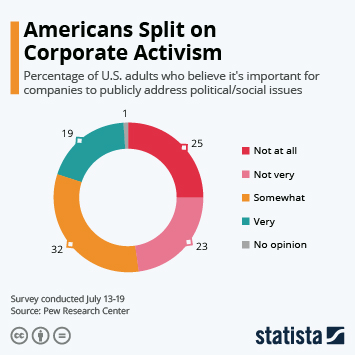