88.9k
In the long history of the music industry, there have been several technological advances that overthrew the status quo. Be it tape recorders, CD burners or, most recently, the rise of MP3: record labels have always been quick to call out the end of recorded music when a new technology arose to threaten its business model.

The same happened in the late 1990s and early 2000s, when filesharing networks like Napster or eMule had quickly gained popularity and sent music sales tumbling. Instead of embracing the new technology, the industry's first reflex was to sue services such as Napster until they closed down. For every service that was closed down another one sprang to life though, and at some point even the most traditional music managers had to admit that digital music wasn't going to go away.

Record companies subsequently tried to jump on the digital bandwagon, but it took the marketing power of Apple to make digital music distribution work. Since its inception in 2003, more than 25 billion songs have been sold through Apple's iTunes Store and ten years later the music industry has stopped bleeding revenue, mainly thanks to digital distribution.

Other industries are currently facing similar challenges. The publishing industry in particular is suffering from a precipitous drop of revenues caused in large part by the ubiquity of free online content. Publishers are desperately trying to find ways to monetize their digital products but thus far digital distribution only accounts for a small share of the steeply declining revenue that U.S. newspaper and magazine publishers rake in.

It will be interesting to see, whether other media industries will follow in the music industry's footsteps and successfully make the transition to the digital age in the long term. Amazon founder Jeff Bezos has already helped eBooks to gain popularity, maybe he can do the same for the newspaper industry. 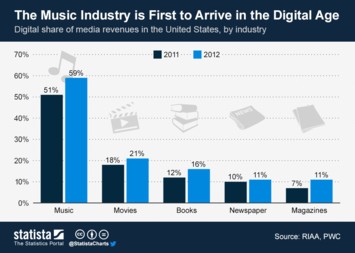 The music industry is two steps ahead of other industries in the ongoing digitization of media distribution. Download and streaming services accounted for almost 60 percent of recorded music revenues in the U.S. in 2012, while other media industries struggle to find a viable strategy for digital distribution.