Half of the American families the Census Bureau surveyed made more than $61,937 while the other half of households made less than that. West Virginia and Mississippi were the two states with the lowest medians, falling under $45,000, while twenty-seven other states and Puerto Rico reported U.S. income that is below the U.S. median.

Despite a household income moving up, this rising tide is not necessarily lifting all boats. The Gini index, a ratio that measures income inequality, rose significantly year-over-year, a sign that the gap between rich and poor in the U.S. is widening. Specifically, income inequality increased in nine states including Alabama, Arkansas, California, Kansas, Nebraska, New Hampshire, New Mexico, Texas, and Virginia. 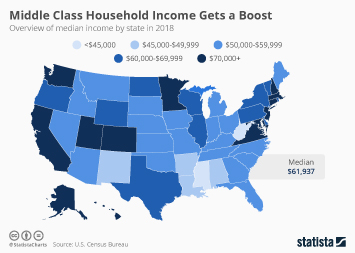 This chart shows an overview of U.S. median income by state for 2018.

Poverty & Income in the U.S.