Skip to main content
53k
74.6k
87k
88.9k
It’s been almost a year since the European Union’s General Data Protection Regulation (GDPR) went into force, and while the wide-ranging regulation designed to protect the personal data and privacy of EU citizens certainly has its flaws, calls for a similar set of rules in the United States are getting louder.

On June 28, 2018, the state of California passed the California Consumer Privacy Act, which resembles GDPR in some aspects and is set to take effect on January 1, 2020. While this is a start, most Americans agree that data protection should be regulated at federal level to facilitate compliance and make the rules more transparent and effective.

According to a recent poll conducted by Morning Consult on behalf of Verizon, 83 percent of registered voters in the U.S. agree that the country needs federal laws protecting consumer data and privacy. 69 percent of the respondents think that the government currently isn’t doing enough to protect the privacy of its citizens and 86 percent think that the U.S., home to some of the most influential internet companies in the world, should be a global leader in terms of consumer data protection.

While Americans do agree on the necessity of new rules to protect consumer privacy online, they also acknowledge the challenges in designing such rules. 71 percent of the respondents agree that new laws on data protection must strike a balance between protecting consumer interests, promoting online businesses and fostering innovation. 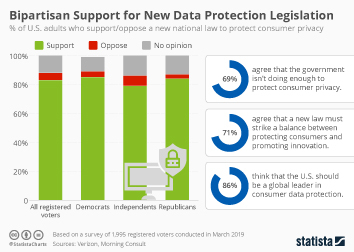 This chart shows the results of a survey about data protection laws in the United States.