53k
74.6k
87k
88.9k
Not only is Finland ranked the happiest country in the world, it also takes tops in media literacy as measured by the Open Society Foundation. This is no accident. Finland has an extensive media literacy program run and funded by the Finnish government, which they start in Kindergarten and continue throughout 12th grade. Finnish adults can also take classes to better how they interact with information online.

The program’s genesis came from Russia’s annexation of Crimea back in 2014. Finland, which shares most of its land border with Russia, saw the fights in Ukraine over truth knocking on its back door, and began mobilizing resources towards countering it. The media literacy program is part of a wider effort to educate all its citizens about the digital environment.

Many other countries across the world and in Europe are looking to Finland to understand how to implement similar programs in their own countries. France and the United Kingdom rank in the middle of the media literacy index, while countries like Hungary and Turkey, which currently have authoritarian and populist regimes, suffer from some of the worst media literacy rates on the continent.

Open Society arrives at its media literacy ranking by weighting averages on eight different metrics: Freedom House Freedom of the Press score; Press Freedom Index by Reporters without Borders; PISA scores in reading, scientific, and mathematical literacy; Eurostat’s trust in others metric; E-participation Index by the UN; and the percent of the population with a university degree, though this metric wasn’t heavily weighted. 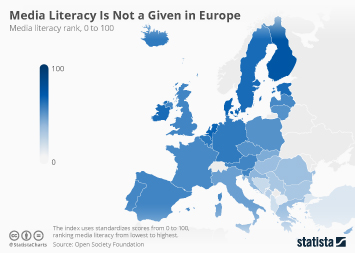 This chart shows the media literacy rank across European countries.